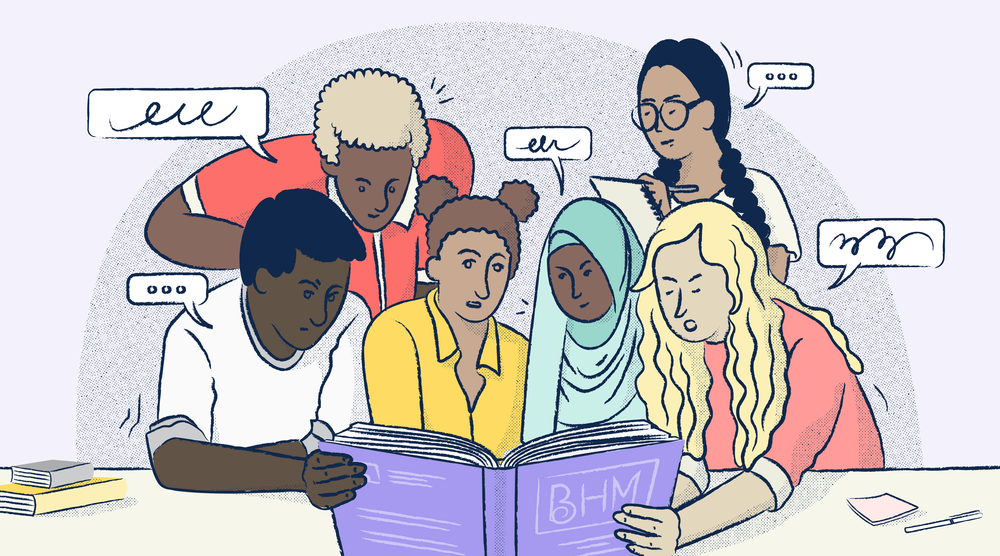 “The most common way people give up their power is by thinking they don’t have any.” — Alice Walker

This Black History Month, the Stark team and our global community “held onto our power” by educating ourselves on several matters related to Black history, as well as present-day occurrences that directly affect Black communities. Rather than the safe approach of sharing a fleeting post acknowledging the month on social media, we decided to host a weekly reading club in the hopes of creating a long-term and sustainable impact. Through our initiative, we came to know that there’s power in knowledge, and with knowledge comes change.

At the start of each week, we picked up a new article, video, or book to learn from. Towards the end of those weeks, we spent an hour discussing what we learned, shared personal experiences, and gained new knowledge from each other as we sat with a wave of emotions—from uneasiness to the feeling of hope. Stark CEO Cat Noone often reminded us that it’s okay to sit with discomfort because it’s in those moments that we think deeply and move forward towards change.

From these conversations, I can confidently say that we learned something new, something challenging, and something that will stick with us for a lifetime. From Emily Bernard’s ‘Black is the Body’ to Isabel Wilkerson’s explanation of America’s ‘caste’ system, here are the four lessons we learned together during our Black History Month reading club.

Lesson #1: The systemic oppression of Black people in America is more than racism; it’s a caste system

During the first week of our Reading Club, we learned from Isabel Wilkerson as she explains how the systemic oppression of Black people in America is a result of its ‘caste’ system. She further describes how we shouldn’t view ‘race’ as the cause of systemic oppression, but rather it should be considered a metric that determines one’s place within the system.

Isabel’s more profound look at the inequality and injustices faced by Black Americans provided many of us with a new and vital perspective. For starters, we learned that the very essence of identifying a group as ‘Black’ or ‘White’ comes from a multilayered caste structure incepted in America. In most places in the world, people don’t see themselves as ‘Black’ or ‘White’ and instead identify themselves by stating their ethnicity. It’s only when those individuals visit The States that they’re seen as ‘Black’ or ‘White’ due to the caste system put in place.

To further the lesson, we learned how different groups of people fit into this multilayered caste structure. Simply put, the closer you are to whiteness or, in other words, to those who created the system, the more elevated you are within society. On the other hand, the closer you are to Blackness, or those who were enslaved, the further down the hierarchy you’re placed.

Whether we realize it or not, the caste system plays into every aspect of American society. You can see systemic oppression take place in various formats, including the water crisis in Flint, Michigan, food deserts across the country, and underfunded schools in marginalized communities. When it comes to education in these marginalized communities, students with disabilities are seriously disadvantaged—and not because of any learning challenges. Beyond the lack of funding at these schools, students with disabilities often face traditional classroom practices that lead to an equity gap. This stems from ability, race, and class biases that consistently lead these students to underperform.

Once we open our eyes to the inner workings of this caste system, we’ll be able to see that, even if all else is equal, the experiences of a white person in America, versus a Black person are and never have been equitable. The fact of the matter is; a caste system built long ago, that’s measured by race, has and continues to systemically oppress Black communities—removing them from the playing field altogether.

During the second week, we listened to Frederick Douglass' descendants deliver his 'Fourth Of July' speech. Frederick Douglass was originally asked to give a speech celebrating the 76th anniversary of the signing of the Declaration of Independence. However, he instead used the opportunity to remind everyone of the realities of America’s so-called “freedom.” In the speech, he says, “What to the American slave is your fourth of July? I answer a day that reveals to him more than all other days in the year, the gross injustice and cruelty to which he is the constant victim.”

We learned a great lesson in this speech written 170 years ago. Unfortunately, not much has changed in terms of the inequalities and injustices faced by Black communities in America. However, with the bravery exemplified by Fredrick Douglass as he rose to speak on behalf of an oppressed group, we learned that it’s on us to be the change. Celebrating the Fourth of July without educating ourselves and others on the negative implications of said celebrations is a failure on our own part. Yes, the Fourth of July is concretized in history to celebrate when America gained its freedom from another country. However, freedom for who? Hundreds of years later, a large group of Americans (from the Indigenous people of the land to African Americans) are still waiting to experience their sense of freedom—it’s important to acknowledge that.

During our third week, we learned about the costs of America’s racial bargain through an interview with Heather McGhee. In her book, Heather describes the ‘zero-sum’ story as, “the idea that there’s this massive dividing line between Black people and white people, that they’re on opposite teams, and that progress for people of color has to come at white people’s expense.”

Heather uses the draining of swimming pools as her central metaphor. In the 1960s, when the time came to integrate Black Americans into public spaces, white-led councils in Alabama opted to shut down and pave over public swimming pools so they wouldn’t have to share them with Black community members.

Today, we can see the same consequences of the zero-sum ideology that’s weaved into America’s caste system play out in our economy. Economic guarantees such as livable wages are no longer assured or obtainable by many. In her interview, Heather emphasizes that these consequences, or the reason “why we can’t have nice things”, aren’t a result of Black people taking from society, but it’s the zero-sum ideology that leads white people to lose at their own expense. In the case of livable wages, the majority of white voters went from supporting this public good in the 50s and 60s, to working against it, when the civil rights movement extended this guarantee to Black Americans as well.

In this, we learned that to overcome this lose-lose ideology, we must come together in what Heather calls “cross-racial organizing”. In other words, we need to band together, despite our differences, to build economic security for all. As the ‘drained swimming pool’ example clarifies, when one group is forced into a losing situation in the name of racism (or really any other -ism), everyone loses as a result—the public swimming pools shut down, minimum wages are no longer livable, and schools in many neighborhoods continue to be underfunded.

Lesson #4: Race as a social construct shapes our experiences whether we realize it or not

Throughout the entirety of Black History Month we read ‘Black is the Body’ by Emily Bernard, and towards the end of the month we gathered together for one last discussion, lingering on her formidable words. The book, which is a collection of several personal essays, shares stories around Emily’s lived experiences as a Black Woman who: grew up in the South, married a white man, adopted Ethiopian children, and teaches African American studies in a primarily white college town.

One important recurring theme we noticed in the book was that our racial identity frames our daily experiences. In a racialized society like the United States, a Black person’s everyday experience, whether it’s at a local grocery store, or a trip across the country, is affected by race. Before stepping outside of your four walls of safety, you tend to wonder, “Am I going to encounter a racist person today?” “Will I feel welcome at this hotel that I plan to book?” “Can I be myself at my new workplace?”

Another less obvious perspective, and perhaps the most important one gained from Emily’s book, was that it isn’t only Black people in America whose experiences in life are shaped by their racial identity. It’s all races; white people included. Black people feel their Blackness just as Emily felt hers when she says, “race is the story of my life, and therefore black is the body of this book.” However, for white people, race isn’t a daily consideration, and in many instances, it’s actually an afterthought. This is because privilege relieves white people from having to deal with negative systemic experiences, while Black, Indigenous, and other people of color have to constantly be aware of their racial identity as they navigate various spaces.

In the third essay titled, ‘Interstates’, Emily shares an example of this when she embarks on a road trip to Mississippi with her parents and white husband. Despite the directions provided by Emily’s father, her husband made stops in places that made her family highly uncomfortable. The discomfort was rooted in years of history as Black people in the South relied on known routes and safe spaces to eat and sleep. Deviating from those routes brought the possibility of “insults to their dignity, or worse”. Emily notes that her husband wasn’t ignorant to this discomfort. Rather, his experience as a white man afforded him the luxury of making stops wherever he pleased, which is evidently not a luxury extended to Black people in America.

In all of the lessons learned, we’ve come to a place of better understanding, deep thinking, and changed perspectives. Each week’s reading, as well as our book of the month, allowed us to form discussions that were filled with our own vulnerabilities, and even pose questions that we normally wouldn’t have the chance to ask. We encourage you all to also learn from the material outlined above, and seek out more resources that will expand your knowledge on Black History, and the present-day experiences of Black communities.