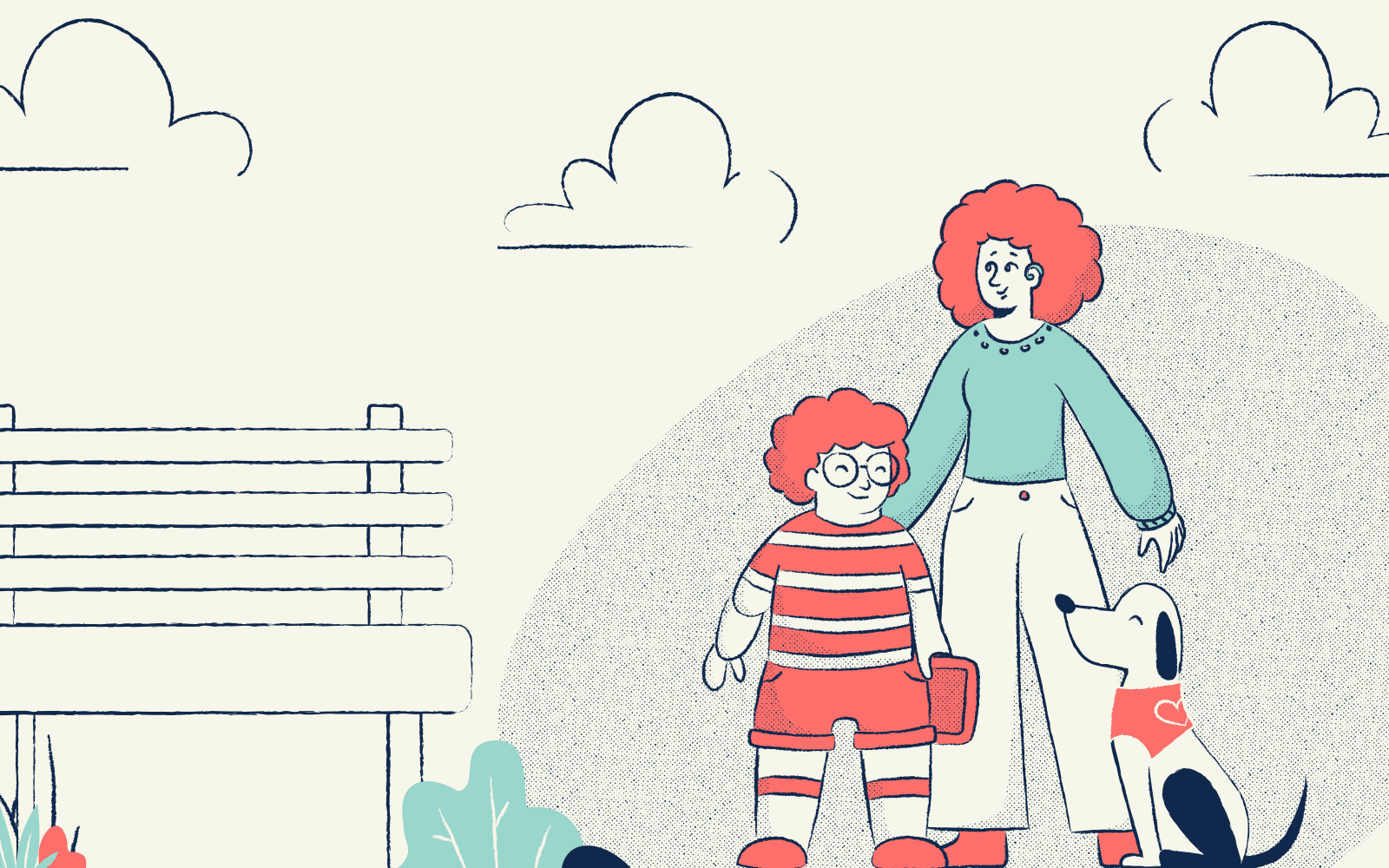 I spent a long time debating whether or not to even write this. And to be honest I’m only doing it because our designer Emaly convinced me that it’s the right thing to do given it’s the annual celebration of people with disabilities and the focus is on the fact that “Not All Disabilities Are Seen”. But I’m anxious writing this, which is exactly why it needs to be done. The fact that I’m anxious is to be expected. But that I’m hesitant is a byproduct of the problem at hand for not just all disabilities, but especially for those that go unnoticed.

As someone working on the platform that strives to be the gold standard for all things accessibility and inclusivity, I figured this is actually the perfect post to write. Some of you reading this may know that previous to getting into the world of tech I worked in Special Education for the New York City Board of Education and in the private sector with children that had a spectrum of disabilities and disorders—from Autism and Cerebral Palsy to other physical, cognitive, and psychological disorders and disabilities.

In working there I gained so much insight into what disability looks like (or doesn’t) and all the ways that presents itself—be it for the individual to the way the system sets them up for failure or success. And to be very clear, despite the system in which they’re funneled through, I’ve watched as service workers and teachers work magic, and in turn children thrive. Does that mean Autism, Prader–Willi syndrome, or Down Syndrome go away? No. It means the children and their caregivers are given the resources and education to learn how to navigate a world not set up for them.

As I mentioned in our post about the rise of accessibility in video games, I was exposed to and educated on quite a bit of “differences from the norm” as a child—from abilities and limb differences, to the color of our skin and languages spoken at home. One of my childhood friends is a person with Autism / is Autistic, health issues riddled my family, and I had a [temporary] nervous tick that would surface around 6 years old (arguably my clear hint that I would deal with anxiety later in life). It wasn’t until I was older that I thought to question what different experiences were like for individuals that weren’t like me. A few years into college, it clicked for me there may have been a reason why my friend didn’t enjoy playing video games and routine was important. Maybe the stimulation was too much, the colors too overwhelming, the sound a bit jarring—I’m not sure. After all, Autism looks different for everyone. I’d eventually leave education and submerge myself fully in tech and eventually, a couple years ago, find myself kickstarting a company in the autism space.

Throughout the years I’d struggle personally in multiple areas, and anxiety attacks (which I didn’t have a name for at one point) were a norm. Keeled over with the dining room table as my support system and blowing into a paper bag, I’d tell myself it’s “too much stress”, “not enough time with friends”, “too much on my plate”, “it’ll be better after another vacation”, etc. etc. etc. This would be fine, everyone experiences it…

Previous to giving it a name, I’d often call them panic attacks, but that wasn’t it. They happened too often and into many situations and, really, I wasn’t panicking about anything. There was nothing to panic about. I was perfectly healthy and the environment around me was set up for success. But I was indeed having uncontrollable anxiety about certain things, and it often presented itself when there were too many situations that I am overwhelmed by and in which I feel I can’t control the outcome or at least some outcomes of. Some of the things and situations that gave me massive anxiety were situations in which I felt I couldn’t ensure I’m successful in a particular area, Or I couldn’t ensure that I keep everyone safe and healthy or I won’t have a moment of peace.

After years of this, I finally said I can’t handle this anxiety. And then, right there it happened. There it was. It clicked that I had a capital "A" Anxiety disorder. Being unable to acknowledge that prevented me from taking the steps I needed to learn to deal with it. I needed to figure something out. And so I’d eventually seek counseling and learn how to manage it. Still refusing to call it out loud or when speaking about it, my thought process was as follows: I was just learning to manage my time. Ya know? People with actual anxiety needed medication, and I didn’t. In fact, I didn’t want medication for anything that could alter my brain because I was totally fine. I never had any thoughts of hurting myself, my body image of myself was great, I was super successful in my career. I was clearly managing (read: compensating)! And it wouldn’t be until about three years ago that it actually clicked that I am a person that fell into one of the disability categories—in what’s considered a mental disorder.

I spend a lot of time on Twitter and other social media platforms trying to better understand what disability looks like for everyone. I pay attention to the ways people discuss the mental health topic, the way society’s system flows to allow ease of use for everyone that is able-bodied, the way it excludes. The way people exclude as a byproduct. The inherent lexicon we’ve been given about those who are seemingly different. And to be frank, I don’t think that’s talked about enough. Not in general, and certainly not with the people it impacts.

There’s so much baked into the overarching topic of mental health and why we hide or talk ourselves out of it. Specifically for me. Failure, success, challenges, perfection, an inability to explain how I feel in some cases. Rationalization for compensation. A conversation that has, until recently, not left room for dialogue and understanding. And, in turn, has left people confused, weary, hesitant, scared, stigmatized, and in some cases killed because they are different.

I’m a white, straight, and privileged woman that lives comfortably. I don’t struggle physically, I’m educated, my senses work just fine with the exception of my vision starting to take its toll—courtesy of a long-line of glasses wearing family. But my brain. My brain processes things a bit different. And though the questions don’t surface too often, I spend my time talking about anxiety as if it weren’t a disorder, and I’m still not sure whether I’m hurting or helping myself and disabilities as a whole by doing so. Realistically though, in many ways I’m still trying to figure it out myself.

I remember saying in the Stark community on Slack that I don’t know if I should even contribute to the conversation from the standpoint that I have a disability. Do I have a right to participate in those convos?

Do the privileged get the right to have a disability and write about it? Do you still have the disability if it’s under control? Is there a tier of anxiety at which you say you have an anxiety disorder? Does it count or be considered if I don’t take medication, but instead chose and found alternative routes that work for me?

Because that’s where I fall and now wrestle with myself. I haven’t had a panic attack in two years, and if 2020 is the benchmark for anxiety inducing scenarios, I’m patting myself on the back for a job well done. I’ve not once taken medication for it, solely because pills scare the shit out of me, but I fully advocate for those who do. My time design is impeccable, and I love the way I know how to navigate around it when something deviates from the normal schedule. I have moments of anxiety spikes here and there, even those micro-moments, but none that these mechanisms I’ve put in place to mitigate that don’t take care of.

I’m not sure what the answer to all of those questions of mine are, but I’m more than open ears. What I am certain of is that in my time building Stark, I’ve quickly realized that the real problem to fix in this space, exists outside of “accessibility”. It’s the shame we put on others, the systems we build, and who we choose to truly see as human beings that exist on this planet and are no different than you (or me?). And the answer to my first question is: Privilege is only a dirty word if you do nothing with it except feed the same system set up to ensure you succeed. A sustainable solution to making the world accessible and inclusive will happen only when people of privilege choose to dismantle a system that makes them feel special and powerful.

So I can’t speak to any physical impairment or social disorder, but I can speak as someone that has an invisible disorder, and in turn, the ones that often go unnoticed solely because they’re hidden. Our brains all tick in different ways, but tick is what they all do. You prefer sour, I prefer sweet. You prefer gentle hugs, and I need hugs that are strong in pressure. You have a to-do list in your head, and my to-do list is written down and broken into chunks alongside a blocked out calendar so that it’s one less thing for my brain to make sense of and organize.

Much like our brains all ticking, we all suffer in our own ways. We hide what we feel the outside world won’t accept. We refuse to put a name to something in fear that it suddenly becomes real. But be it silent or aware: if nothing else in this mad world, we’re in that together, too.

I hope today and every day that people are given the space to speak their truth without repercussion and fear. I’m thrilled to be building a company that has me doing my most important and challenging work. We have uncomfortable conversations, challenge an internet that was made for white, straight, able-bodied men, and do our best to move the needle forward. And we can do so because we’re surrounded and supported by a community of people that come from all walks of life, colors, shapes, preferences, some with a preferred gender, others that identify with neither, limb differences, temporary disabilities, curiosity, and stories. And goodness, their stories are so incredible. They are the teachers and students of this space, and I’m so grateful to learn something new from all of them every day. And I hope together in all of the innovation this industry talks about, the “let’s build” mentality extends to redesigning a world that is usable to everyone, and do so with the greatest architects and innovators the world has ever known—people with disabilities.

Disabled does not mean unable. Let’s get to work...

P.S. What does invisible disability look like for you? Is it your own, a friend or loved one? How do you manage yours? Am I taking the best approach?